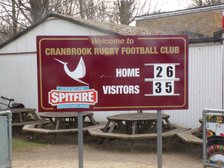 Cranbrook Ladies 26 Heathfield Ladies 35
Heathfield shared nine tries with a resilient Cranbrook team in an entertaining and generally fluid game notable for four tries for the Heathfield full back Ellie Wright.
Conditions were excellent on a mostly sunny day with little wind and a pitch just taking a stud.
Heathfield started with a clinical score with just 2 minutes on the clock. First they secured good lineout ball (one of the few such successes on the day) and the ball was moved wide right for Wright to beat the last defender and touch down under the posts. Megan Plane converted as she did for all of the Heathfield tries – reflecting some focus on that aspect in recent training.
Cranbrook came charging back and it took a big, albeit high, tackle by Wright to stop a flying home winger. There was considerable debate then and afterwards about the technicalities of that tackle with some suggesting that a card would have been appropriate.
It was already noticeable that Cranbrook were keen to move the ball so an open contest was in prospect. This was a distinct change from previous encounters when Cranbrook have tended to look a generally forward oriented operation. Much of the game was now in the visitors’ half and it took serious defensive efforts to prevent a score with Sophie Saunders and Brit Mole being especially noted in this respect. However Heathfield were looking threatening on the counter with Katie Baurer making one eye-catching run stepping around multiple tacklers.
Towards the end of the first quarter good scrum possession was moved left with Lizzy Suggitt making useful yards before quick ruck ball reached Wright who finished clinically. Sadly Suggitt now had to retire with a leg injury.
Cranbrook again surged back into the visitors’ 22 and Sam Crook was now binned for handling on the floor. This was just the 4th penalty against Heathfield so the card was somewhat early but the referee had warned that a card was imminent – and perhaps he may have been compensating for not issuing a card for the earlier high tackle.
Cranbrook duly took advantage of the extra person and worked their way over from short range. However Heathfield soon replied as a penalty was tapped and good hands yet again moved the ball to Wright with the almost inevitable outcome.
Cranbrook were still undaunted and more pressure into the visitors’ 22 resulted in another yellow, this time for Mole, again for handling on the floor. With just eight penalties against Heathfield so far they could feel slightly aggrieved at the quickness of this second card.
The halftime score of 5-21 looks comfortable. However Heathfield were under pressure in the scrum where the distinctly larger home pack had a clear edge and Cranbrook were successfully disrupting most Heathfield lineout ball. However Cranbrook never really exploited their scrummage superiority and Amber Lovick at number 8 normally managed to salvage possession under pressure.
The second half started with a bang as Saunders secured yet another turnover from the restart and good hands duly found Wright to collect the bonus point try – all four by her!
To their credit, this just seemed to spur Cranbrook on and much of the game was now in the visitors’ 22. They scored two similar tries from short range to give a 19-28 score so the result no longer looked so obvious.
However approaching the last quarter a rare Heathfield visit to the home 22 was capped by a fine finish by Robyn Pope stepping round defenders in the left hand corner before touching down under the posts.
With plenty of time left Cranbrook were still fighting back. Yet more pressure resulted in a yellow for Pope for a deliberate knock on so she had something of a mixed day.
Cranbrook collected one more try with about ten minutes remaining, again from short range, but otherwise the Heathfield defence proved adequate.
Given the difficulties at the set piece Heathfield had to rely on turnover ball and counter attacks which they certainly achieved with all of the squad contributing on the day. The coaches particularly mentioned Sammie Williams and Georgia Reed-Davies for their efforts.
It should be noted that Cranbrook ‘won’ the second half 21-14. They are now playing a more all-round game than previously to go with their strong pack with their inside centre and both wingers being especially noteworthy. The quality of this game was clearly higher than the early season encounter between these teams – also reflecting the generally improving standards in the womens’ game.
The result leaves Heathfield in a close contest with Streatham & Croydon for second place in the league. The last game in Heathfield’s season is next Sunday when Blackheath Ladies II are due to visit (17 Apr 2.00).
Team
1. Sammie Williams 2. Brittany Mole 3. Kaylee Honeyball 4. Velvet Turner 5. Sam Crook 6 Lauren Duly 7 Sophie Saunders 8. Amber Lovick 9. Megan Plane 10. Becky Ford 11 Chip Chippett 12 Sophia Skinner 13. Lizzy Suggitt 14 Katie Baurer 15. Ellie Wright
Replacements
16. Poppy Eacott 17. Hannah Wood 18. Georgia Reed-Davies 19. Sarah Turner 20. Robyn Pope
Share via
FacebookTwitter
https://www.hwrfc.co.uk/teams/
Recent news